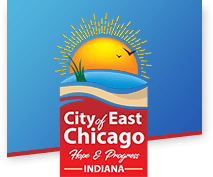 History of Our City 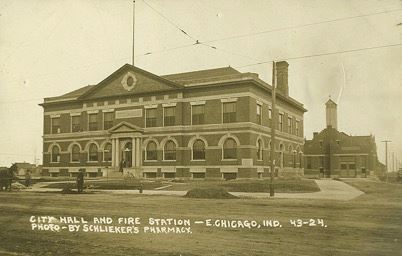 The City of East Chicago was incorporated in 1893, the same year as the great Columbian Exhibition on the south side of Chicago. Born of railroad and steel, East Chicago was one of northwest Indiana’s first truly industrial cities designed to meet the needs of workers and industry. The city was originally known as the Twin City, with the East Chicago (western section) separated from the Indiana Harbor section by a vast rail yard that served as the rail gateway to Chicago and the west.

During the peak of the great Industrial Revolution East Chicago was known as the most industrialized municipality and America’s ultimate melting pot where four out of five of its citizens were foreign-born. It was during this period in our city's history that more than seventy nationalities, each with it's own ethnic based church, neighborhoods and stores, lived, worked and flourished for generations.

During World War I East Chicago was known as the "Arsenal of America" and as the noted South-Shore Railroad poster proclaimed, it was the "Workshop of America." The history of this great city can best be defined through the images and definitions of the City Seal and the flag of East Chicago.

While East Chicago was originally known as the Twin City due to the expansive rail yards that divided the two great halves of this city, the construction of an overpass on Columbus Drive in the early 1930’s brought all of East Chicago together. It was the time of the automobile and the beginning of a much more mobile society.

East Chicago, like many cities and towns, is made up of unique neighborhoods, each with it's own distinct characteristics and needs. From Roxana on the south side, to the Marktown Historic District on the north side, East Chicago is home to 30,000 residents.

View historical photos of East Chicago in the Photo Gallery.

The official flag of East Chicago is white, quartered with a wide blue bar running though its center. The upper left and lower right depicts two crosses, which represent the intrepid Jesuit explorers, Marquette, Jolliet, and LaSalle. The beehives in the opposite corners represent the industrial nature of the residents and of industry. The blue band in the center represents the Indiana Harbor Ship Canal, which provides us access to the world markets via Lake Michigan. 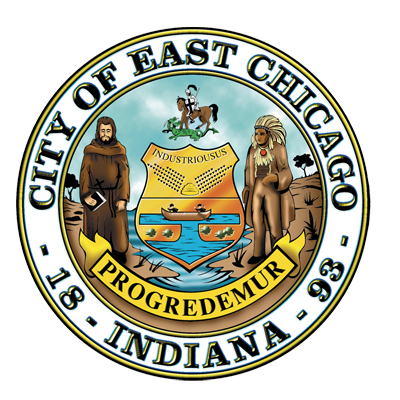 A large facsimile of the City Seal can be seen:

During the city's Diamond Jubilee in 1968, bronze coins were minted to commemorate the event. While they are vary rare and difficult to find, they are available on occasion through local antique stores.